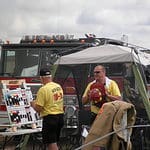 Do you ever wonder what the people in scanner land think when they listen to us respond to a fire? What does heavy smoke showing mean to the lay person? Do they really think we weigh the smoke, and if so, what kind of scale would we use? I often wonder what we sound like to them but don’t know anyone who listens that doesn’t have some background, past or present, in the fire or emergency services.
I know from personal experience that most of us turn up the scanner when we hear a department paged out for what sounds like a burner. We listen closely, often wondering what is taking them so long to respond to the page. We experience a rush of adrenaline followed by anxiety, as we wait for what feels like hours when in reality are only minutes.
In the time between the page and the response we have looked up the address and identified the nearest departments in an attempt to predict who will be called for mutual aid. Then the radio traffic starts and what sounds like normal communications to us, must sound like complete chaos to the lay person.
The question that I want to ask is why would we have to guess who is going to get called for mutual aid? It is now 2012, and the MABAS system has been a widely excepted means for response planning in Wisconsin for over ten years.
I recently listened as a fire department was paged out for a confirmed structure fire. While en-route they requested several pieces of apparatus from a number of surrounding departments. Once on scene it sounded as though the incident commander became overwhelmed by the communications involved with the operations side of the incident.
As mutual aid units began arriving on scene it sounded as though the incident commander could not remember what units he had called for or where they were coming from, asking what the unit was they were bringing.
I could talk endlessly about the need to establish a command system that includes operations and sectors, but my point today is this; how can you expect to be successful on the fire ground when you cannot remember what resources you’ve requested and where they are coming from. The bottom line is that you cannot expect to be successful.
The MABAS system, when used, works and works well. I don’t care if your department is large or small, the system works. What you have to remember is that the system is only as good as the information you put into it.
Taking a little time to preplan your responses now, will allow you the time to make operational decisions once on the fire ground. No one likes to hear the arm chair quarterbacks assess their performance, myself included. However, in a day when everyone has a cell phone with a camera and/or video and uploads to facebook and YouTube are now the norm you need to expect to be critiqued not only by those who know your business but also those that don’t. Trust me, your harshest critics will not be those in the fire service, they will be from those the fire service serves – the taxpayers.
The expectations of those we serve have never been higher. Just showing up is not good enough. They want action, they want results, and they want professionals. They invest hundreds of thousands of dollars in equipment, gear, training, and facilities. Let’s show them the money was well spent. Take the time and preplan your responses today.