Get the Extra on Chicago Fire 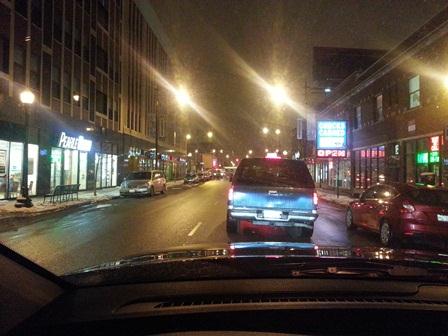 WOW – what a trip! Who ever said show business was easy never worked as an extra. Overall the experience was pretty awesome. Rush hour in the city is nuts though and just reconfirmed my desire to remain a guest and not a resident of the windy city. My new GPS was very helpful until it started recalculating the route due to “new” traffic information. With no co-pilot and very little experience driving in Chicago, let alone at night, I really didn’t have a choice other than to go where my newly trusted friend told me to. I got a bit nervous as she told me to get off the expressway. Soon I found myself going right through residential parts of the city, and not all of them looked to be real friendly to outsiders. Nonetheless, I treaded on.

When I received a confirmation call on the day before I found out that they were shooting at the Hilton in downtown Chicago. I figured with an early morning it would be easier to stay the night then to fight the morning rush hour traffic. The hotel was beautiful. Imagine my surprise when I the check in lady informed me that I would be in room 1027, the same room number I had at the Hilton in Milwaukee last weekend at WEMSA – weird.

My day started with checking in at the registration station at 6:30am. Here they looked you over, had you try on your different outfits (you needed to bring 3) and then if they decided they didn’t like any of them they sent you off to another area where they had racks of shirts, ties, suits, and shoes ect. for men, as well as dresses, jewelry, tops, and ect. for women.
Once you were dressed to their liking you went off to hair and make-up where they basically gave you a free hair cut and put make-up on you so you don’t create a shine/glare if you are lucky enough to be in the shot. Then you went to the holding room. This is where you waited until everyone checked in. There was a room off to the side that had some breakfast items such as bagels, oatmeal, and fruit. No eggs, bacon, or cheese – definitely not a Wisconsin breakfast.

I would estimate that there were approximately 250 people who came to be extras and everyone staged in the holding room. This is where you got your instructions, had your lunch, snacks, and milled around until you were called for a scene. It took until 10am for everyone to get fitted and checked in, we begin filming the first scene around 11am.Filming a scene took a great deal longer than I had expected. There were numerous reasons to redo a scene, people in the wrong spot, lines were read incorrectly, director didn’t like the camera angle or wanted to repeat the shot in at a different angle. It was all very interesting – how they set things up, moved the cameras, positioned the actors and the extras. I felt sorrow for the women who had to where high heels – by early afternoon you could tell that their legs were pretty sore. Most of them took their shoes off in between takes. Although you meet a lot of new people, you were not allowed to chat during filming, even when they were between shots. Understandably, 250 people can quickly become noisy, even when they are whispering. A table outside of our holding room was routinely freshened with chips, granola bars, bottled water, punch, and other snacks. We finally broke for a 30 minute lunch around 3:30pm (apparently the Hollywood types were still on west coast time).
Something that really amazed me were how many people it took to make things happen. During lunch I was able to see all of the crew eating and it was then that I realized there were just as many of them as there were of us. People were working on lighting, make-up, hair, staging the extras, moving the camera’s, changing the set, moving props, staging new props, the list goes on and on. There is always someone doing something. Ironically, the system very much resembled the incident command system. The director was in charge overall, but much sector and company officers, there were areas that were broken down into smaller groups to make the execution easier to manage and more precise.Another thing I found interesting was the staff’s ability to remain calm and friendly, even when it was clear that things were not going quite as planned and the intensity of the atmosphere had been elevated. They continued to remain focused and give direction without becoming rude, demeaning, or making you feel uncomfortable.
It may be hard to immagine but 14+hrs went by really fast. Things are always happening, and unfortunately you don’t really get to sit and chat with the stars. As one staff member put it, “no offense, but they are here to work, there are things that need to get done and budgets to stay within. If you want autographs and photo ops, check out the public appearances.” He wasn’t rude, just straight up. Nonethe less, I did get to work close to the actors. I sat directly accross from Treat Williams, Wiliams plays Benny Severide, a retired firefighter and Kelly Severide’s dad. I also worked within 10ft of Eamonn Walter aka Chief Boden, Jesse Spencer aka Casey, Lauren Geman aka Shay, Monica Raymond aka Dawson, and Charlie Barnett aka Mills.

My day finally finished around 8:30pm. They had two more scenes to shoot and only needed a few people for background, this would take them until about 11:30pm so I decided with a 3 hour drive ahead of me, it was a good time to exit “stage right”. While talking with one of the crew I found out that the show would air sometime in late February or early March depending on editing time. To my surprise, all of todays shooting would only account for about 4 minutes of the show. It is really something else what they go through to make an hours worth of television.
Overall it was a really good experience and I am glad that I did it. Will I be on the big screen? Probably not, and if I am it will be such a quick blur that I most likely won’t recognize it. Nonetheless, the opportunity to be part of a television show doesn’t present itself every day, especially a television show that is about a profession you hold near and dear to your heart.